Where is Vanuatu Located - Where Located
Breaking News

Vanuatu means “Our eternal country” – a catchy-sounding name for the small island state, which is located in the South Pacific and consists of 83 islands or island groups. Geographically, the area belongs to Melanesia. Of the 83 islands, 67 are inhabited. Most of them belong to the archipelago of the New Hebrides. The Banks and Torres Islands are also part of Vanuatu.

From the air, the small islands form the shape of a “ypsilon”. You can also see this very well on the adjacent map. The state stretches for a length of 1300 kilometers from the Torres Islands in the northwest to two small islands in the south, which are called Hunter and Matthew.

The highest peak that can be found on Vanuatu is called Tabwemasana, a mountain with a height of 1879 meters. It is located on the island of Espíritu Santo, that is, the largest island of the small state. The total land area of Vanuatu is 12,190 square kilometers. This corresponds approximately to the size of the federal state of Schleswig-Holstein.

The area is prone to earthquakes. On the island of Tanna there is a well-known volcano, which is called Mount Yasur. According to popular belief, this is the seat of the gods. In addition to this, another eight volcanoes of the archipelago are active. Of these, three are below sea level. At the turn of the millennium, two major earthquakes shook the region, bringing with them a tsunami.

In addition, there are the frequent cyclones, which again and again cause severe devastation. The islands are located on the border of the Indian-Australian and Pacific Plates, an earthquake-prone region that is not tectonically stable. 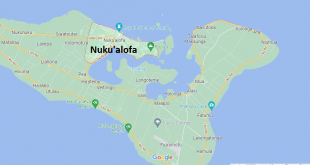