Where is Nicaragua Located - Where Located
Breaking News

Where is Nicaragua Located

where 3 weeks ago North America Leave a comment 32 Views

Where is Managua Located

Nicaragua is located in Central America. This is the name of the mainland of Central America, which also includes numerous islands in the Caribbean. Nicaragua has two land borders: in the north with Honduras, in the south with Costa Rica.

The country can be divided geographically into three regions: the western coast, which is crossed by volcanoes (Pacific zone), the central zone (mountainous and wooded) and the Caribbean plain. Below you will find more maps of Nicaragua.

The west borders the Pacific Ocean. Here, the north-westernmost tip has a share in the Gulf of Fonseca, which is also bordered by Honduras and El Salvador. In the west are also the major cities of the country.

Caribbean coast
The east is bordered by the Caribbean Sea, a secondary sea of the Atlantic Ocean. The east and south are much more sparsely populated than the fertile West. The Caribbean coast has savannas and marshland in the northern part, dense rainforest in the southern part.

This region is also called the Miskito coast, because the Miskito people live here. The Miskito coast stretches in the north across the border to Honduras. It is much more rugged than the west coast. There are lagoons, bays and marshy marshland. The rivers that flow into the Caribbean Sea form large deltas. Most of the country’s mineral resources are located here in the east.

What is Nicaragua best known for?
Is Nicaragua an African country?
What language is spoken in Nicaragua?
What is the nationality of a person from Nicaragua?

Share
Previous Where is Auckland Located
Next Where is Managua Located 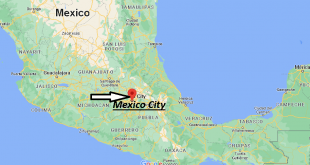 Where is Mexico City Located