Where is Adelaide Located - Where Located
Breaking News

Where is Canberra Located

Where is Tasmania Located

Where is Gold Coast Located

Which part of Australia is Adelaide located?

Adelaide is located between the beaches on Gulf St. Vincent and the Mount Lofty Ranges. The city centre, surrounded by parks, is divided into Adelaide city centre and North Adelaide. The square-shaped city center is similar to that of Melbourne and Christchurch (New Zealand). It was planned from the outset as a business district, kept in strict architecture and is surrounded by the leisurely flowing Torrens River. In contrast to this are the charming residential areas such as North Adelaide. There are many museums and attractions along the North Terrace, many of which are free of charge. The influence of many immigrants from Central Europe makes Adelaide probably the most cozy Australian city. Until the 60s, Adelaide was considered rather boring and puritanical, of which nothing can be felt today.

The term “Festival City” is no coincidence. In even-numbered years, the largest cultural festival in the Asia/Pacific region takes place here in March in the capital of the state of South Australia. The Adelaide Festival attracts around one million visitors each. There are also other festivals such as the Fringe Festival and Womadelaide. Adelaide is also known as the Wine city of Australia: six of the best ten wines in Australia are produced within an hour’s drive of the city and Adelaide is home to the National Wine Centre of Australia. In addition, Adelaide is still named as a city of churches.

With an area of 3,260 km2 and a population of about 1.36 million, Adelaide is the 5th largest city in Australia. In addition, the so-called ‘City of Churches’ or ‘Festival City’ (City of Festivals) is the capital of the state of South Australia. Despite the fact that Adelaide is a city of millions and has long been considered stuffy, boring and faceless, the South Australian metropolis is characterized by a very charismatic flair on a sophisticated and cultured level. 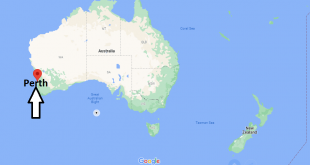 Perth: the largest and only major city on the west coast of Australia. The first …